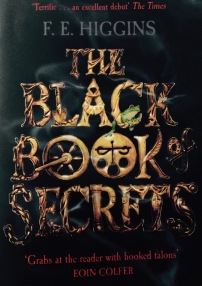 As described by Eoin Colfer, author of the Artemis Fowl, The Black Book of secrets grabs the reader with ‘hooked talons’. I found myself getting totally sucked into this dark story filled with secrets and mystery, in similar way I was transfixed by The Blackthorn Key. They both have young male main characters, who have been able to escape their unfortunate backgrounds and learn a trade that will help them heave themselves out of their former lives. In this book we meet Ludlow Fitch, a young man whose parents make him to steal for them and use him to make money in any way possible. When we first meet Ludlow, his parents are forcing him to have his teeth removed and sold so that they can get some extra money to spend on alcohol. As you can imagine, they aren’t particularly nice and Ludlow fortunately manages to escape their enslavement.

By chance Ludlow meets Joe Zabbidou, a secret pawnbroker. This means that he buys secrets from people. Ludlow becomes his scribe and writes down all the secrets in a special black book. Ludlow becomes ever more curious of Joe’s motives and of the people in the village, including a rather vile and greedy man called Jeremiah Ratchet, who appears to run and own the place. Most people are  in debt to him in one way or another and want to get pay back for the harm he has caused them. 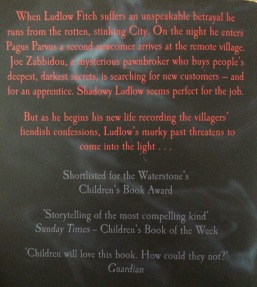 It’s a story that really keeps you guessing, even at the end. Throughout, you question whether it is all real, or if there is an element of magic involved. F.E. Higgins tempts you with snippets of information and then Joe will say something in Latin which basically means ‘just wait’. Frustrating! And then there’s the frog – always a little mention of the bright green amongst the dull and grey…

Check out the interview below with the author herself.

‘All in life is never as it actually appears…’