For those of you who don’t know, I’m due to have a baby next month and so I have

stopped teaching for the moment to get ready for the new addition to our family! When I decided to start my maternity leave, a friend at work gave me a ‘Mrs Dobney pamper hamper’ filled with goodies, including two books: The Explorer by the Katherine Rundell and Letters from the Lighthouse by Emma Carroll. I’ve been reading lots of books about children, rather than children’s books as of late, so I was excited to get some recommended books and take advantage of the time that I now have to read them. The first book I decided to read was The Explorer…

As with Rooftoppers by Katherine Rundell, The Explorer was encapsulating from the start, dripping with rich and original description and had strong and relatable characters. It was immediately evident to see why it won the Costa Children’s Book Award 2017.

The story begins with four children taking a flight over the Amazon jungle, when the pilot takes a turn for the worse and crashes. Left to their own devices, the children have to somehow survive in the middle of the dangerous jungle without any experience or real knowledge about this green world that they have been hurled into. As you get to know the children, their experiences and relationships with their families and their own self perceptions, you can’t help but become attached to them, just like Sophie in Rooftoppers and Feodora in The Wolf Wilder. The resilience and determination of each of the children in their own unique way is uplifting and something that Katherine Rundell is particularly good at. Despite each of their backgrounds being so different, there are elements of each character that are relatable, whether it be Lila’s fierce protection of her younger brother Max, Fred’s feeling of rejection from his Dad or Con’s loneliness. You really come away from the book feeling like you know each character. 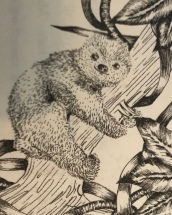 The book has a great pace and an imaginative story with twists and turns like the Amazon River! Green is the theme and it is clear to see that conservation is a motivation for this story. The book also has some beautiful illustrations which I couldn’t wait to get to see – it was difficult to resist flicking to the next pictures further on in the book, but I was strong and managed it!

I would highly recommend this book to any one in Upper KS2 and beyond. It would be a great class reader – class teachers, if you haven’t read anything by Katharine Rundell, The Explorer is as good a place to start as any. She is one of my favourite authors at the moment, but don’t just take my word for it, her awards and support from the industry is clear to see. This story has a definite Eva Ibbotson vibe, so if you have enjoyed books by her such as Journey to the River Sea, give this a go!